APECS was well-represented at and heavily involved in the Arctic Science Summit Week (ASSW) 2022, held 26 March to 1 April in Tromsø, Norway.

On the first day of the conference, multiple members of the APECS leadership participated in Polar Educators International’s interactive workshop focused on collaboration between scientists and educators for the next version of the Polar Resource Book. On Monday 28 March, APECS organized four workshops focused on polar early career scientists. That night, at the conference dinner, the APECS Executive Director presented the 2021 APECS International Mentorship Award to Dr. Shridhar Jawak.

ASSW 2022 provided an opportunity for the APECS Executive Committee and Executive Director to meet physically on 29 March. Having only met previously in online meetings, this was a very appreciated and critical chance for the current APECS leadership to dig into strategic topics. 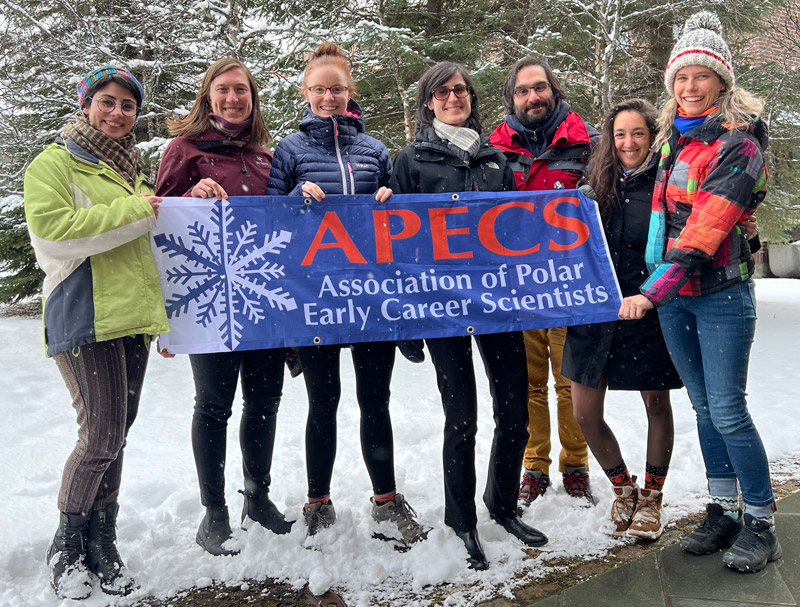 During the first part of this meeting, the APECS leadership met key individuals from APECS’ new host institutions in Tromsø: UiT The Arctic University of Norway, the Norwegian Polar Institute (NPI), and the Fram Centre. The following people participated from UiT: Dag Rune Olsen, Rector; Camilla Brekke, Pro-Rector for Research and Development; Johanne Raade, Library Director; and Steinar Paulsen, Team leader of Research & Innovation. Geir Gotaas, leader of NPI’s Ny-Ålesund Programme, participated representing NPI and the Fram Centre. The aim of this part of the meeting was for all the organizations to get to know each other better, to exchange ideas on how APECS can develop in the next years, and to discuss what the new host institutions can collaborate on. The rest of the day was spent discussing important overarching topics for APECS like internal communication, the organization’s website, and the ten priorities of the current Executive Committee. UiT published a news piece on the meeting (in Norwegian only).

The same day, the APECS Executive Director participated in the ICARP IV Steering Committee meeting and APECS was involved in convening the session “Diversity, equity, inclusion and field safety: an Arctic perspective.”

ASSW 2022 concluded with the Arctic Observing Summit held from 30 March to 1 April. One of our APECS Project Officers participated and helped run sessions as a member of the Capacity Sharing Working Group (WG6).

Photo: The APECS Executive Committee 2021-2022 and Executive Director on the UiT campus.