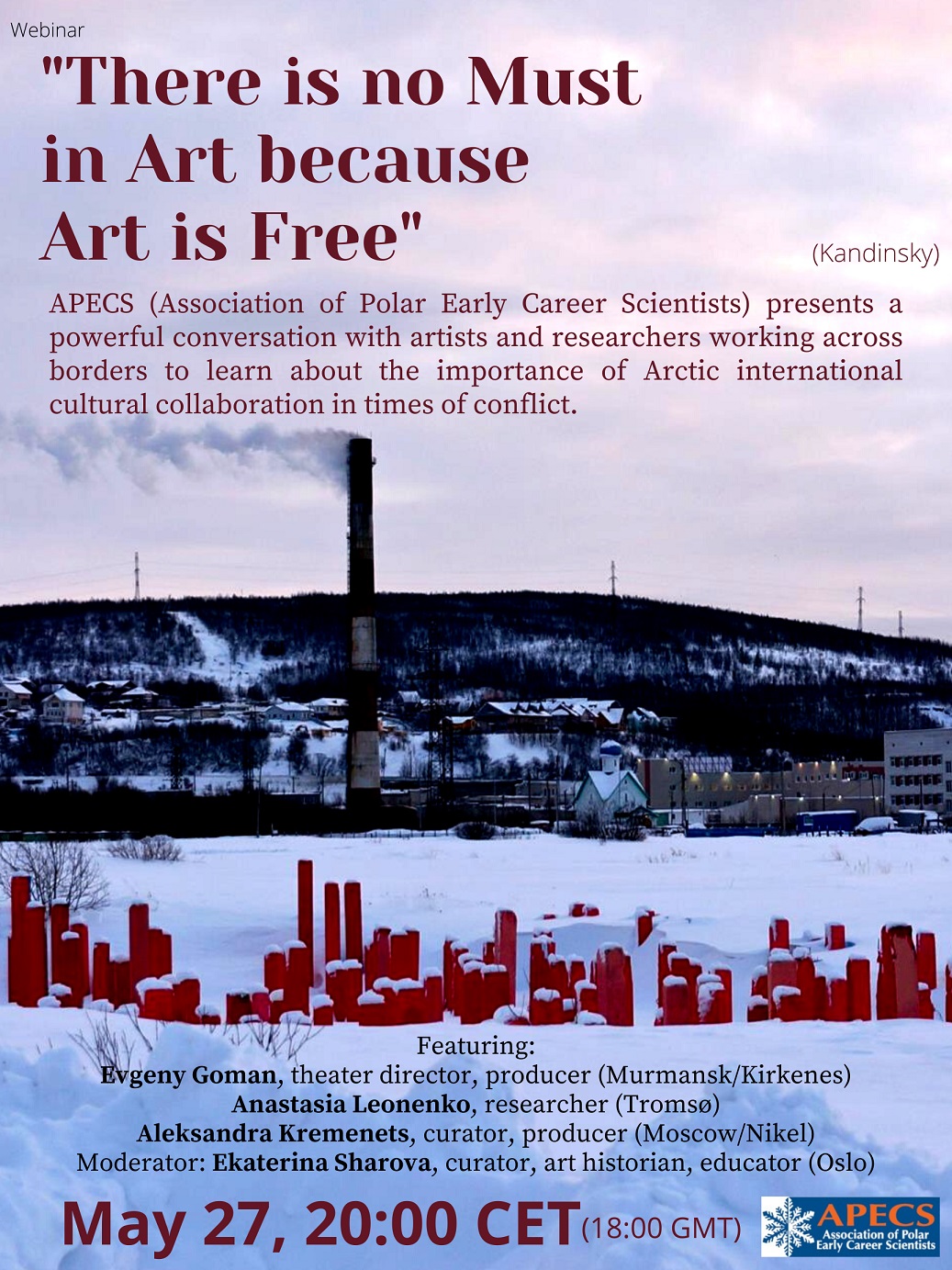 There is no must in art because art is free. - Kandinsky

The APECS Art webinar “Art in the time of conflict” addresses the importance of dialogue and collaboration during times of geopolitical crisis, exemplified by the current conflict in Ukraine.

The webinar will feature innovative artists and researchers from Russia and Norway, working across borders, to discuss the power of cultural collaboration and their own transdisciplinary and transnational work in our present moment.

Art can be used to organise people around a certain goal. Art can inspire and empower people to become change-makers in their surroundings. These socially engaged practices are usually participatory, gathering people from a certain area in a joint effort to make their neighbourhood a better place to live.

Evgeny Goman, a theatre director from Murmansk who has lived in Kirkenes since January, is working with Russian artists in exile to present different voices of Russia, away from the militaristic officialdom. “With the start of the war, we really understood why we do art...why it is a powerful instrument,” the 42-year-old said at the art gallery that houses a regional collective of curators and artists, Girls on the Bridge.

She examines the relationship between political visions, initiatives and expectations for Norwegian-Russian cultural cooperation in the Barents region on the one hand and concrete Norwegian and Russian contributions on the other. Anastasia will provide new knowledge about the Norwegian-Russian cultural cooperation in the Barents region, focus on influential projects, map progress as well as setbacks and assess the potential significance of the events locally, regionally, nationally and internationally.

Sasha was brought into the project in Nickel a few years ago because of her track record with community-orientated work. The first editions of the residency programme have provided alternative lenses to let the local community see their town from new perspectives. It is already showing how contemporary art can be embedded in the community, in the development of the town and in the progression of opportunities for locals.

Nordistica is another North oriented project of Alexandra. Art galleries, residences, museums, cultural and creative organisations, important news of the cultural life of the region, useful information, art projects and acquaintance with creative people are here. Residents of the North, as Russians and Norwegians in general, can learn more about cultural places and projects that are being created in the region.

Moderator - Ekaterina Sharova, a Norwegian-Russian curator, producer and educator. She is a co-founder of Arctic Art Institute, an international contemporary art platform in the Arctic that operates as a residency-based venue for artists, writers, musicians from around the world. She previously worked at Pikene på Broen - a curatorial collective on the border between Norway, Russia, and Finland, and freelanced as a producer for Festspillene i Nord-Norge, as a curator for Arctic Arts Summit. She has been a co-founder of the Nickel Art Center, the Teriberka festival and initiated and curated four editions of the Arctic Art Forum. She has been working as an adviser for Àbadakone, an exhibition of contemporary Indigenous art at the National Gallery of Canada.

The webinar will allow the public to exchange opinions, build dialog over Q&A parts and hopefully inspire each other for an optimistic, creative future Arctic Art.

APECS Art is welcome to invite for pre-registration, sign up here.