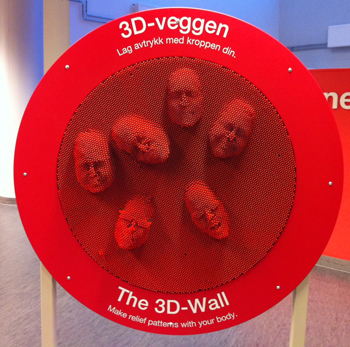 - A Science Center for and about northern parts of Norway

This month the APECS Executive Committee came to the fabulous Paris of the North and received the star treatment… great weather, spectacular Northern Lights - and a great tour of the newly expanded Northern Norway Science Center… check out the fun picture of our great group in one of the exhibits, can you pick out who's who?  And they attempted to spell out APECS with their body silhouettes :)

Nordnorsk vitensenter (The Science Center of Northern Norway) was established 29th August 2002 and is a non-profit Science Center located at the world's northernmost university, the University of Tromsø.

The close connection between the Science Center and the University gives them an unique possibility to be a key partner for the school system in the region (Northern-Norway), both in education of students (from 6 to 19 years old) and of today's and tomorrow's teachers. The aim of the establishment is to change attitudes towards science and technology among students, and through this increase the number of students who later choose a higher education in science and technology.

The activities at the Science Center shall help the school system, who struggle to equip the students (and the teachers) with scientific and technological skills, as well as making science and technology accessible for ordinary people.

Currently they are working on exhibitions for, Energy and Environment up North, The Sky Above, Climate and Weather, Body and Brain and other subjects within Mathematics, Science and Technology.

Learn more about this great place here in Tromsø: http://nordnorsk.vitensenter.no/engelsk/about.php