A few weeks ago I had the opportunity to meet up with two APECS Council members, Alexey Pavlov (Russia) and Ella Darlington (UK) after they returned from a cruise in the Arctic onboard the Norwegian ship, the R/V Lance. Alexey and Ella along with Paul Dodd gave me a nice tour of this old, but sturdy vessel, which perhaps some of you have been on. 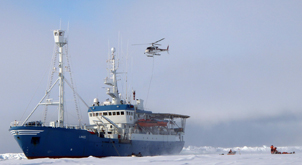 "The Lance was launched in 1978 as a combined fishing and sealing vessel for arctic waters. At the time she proved too large and expensive to run, and her career as a fishing vessel was brief. Seeing Lance’s potential for other tasks, the Norwegian Hydrographic Service acquired her in 1981, and she was rebuilt to meet requirements as a hydrographic survey vessel also suitable for research, expeditions and oil recovery purposes. She was rebuilt again in 1992 to meet requirements for research expeditions in the Antarctic and the Arctic. The Norwegian Hydrographic Service operated Lance until 1994, using her both as a survey vessel and as a research vessel for the Norwegian Polar Institute and other institutions. In 1994 she was handed over to the Norwegian Polar Institute. In the period 1995-2000 Lance also served as a coastguard vessel in the Barents Sea for parts of the year (hence the grey colour scheme in some pictures)." - from the Lance website.

To read more about this important vessel, visit http://lance.npolar.no/en/