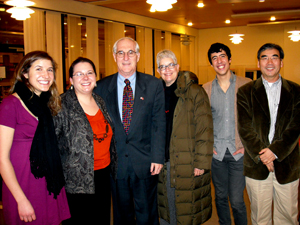 We thank Megan O'Sadnick, US Fulbright Programme Scholar, for this months contribution to the great things happening in Norway for Polar Researchers.

From January 24th-29th, the Arctic Frontiers Conference was held in Tromsø, Norway. Since 2007, policy-makers, scientists, industry representatives, members of regional interest groups and NGOs have been invited to this gathering in order to discuss their stance on current and upcoming environmental, social, and economic challenges in the Arctic. Among the many notable figures in attendance was the US Ambassador to Norway, Barry White. Megan O'Sadnick, APECS member, along with two other Fulbright grantees, Lanbo Liu and Evan Axelrad, and APECS Director, Jenny Baeseman, had the opportunity to meet with Ambassador White and his wife, Eleanor, to discuss current work and overall experiences in Norway.

Megan's Fulbright grant has brought her here, to Tromsø, where she is currently working as a research assistant in the Polar Climate section at the Norwegian Polar Institute. Megan says "As an early career scientist, this experience has been insurmountable for what it has taught me both in terms of research and professional skills. I have also been afforded the opportunity to meet many intriguing people in and out of my field who are constantly broadening my horizons. Not to be forgotten is the chance my Fulbright grant has given me to live in Norway- an astoundingly beautiful country, in both scenery and culture alike."

Established in 1946 by US Senator William J. Fulbright, the Fulbright Program provides grants to students, researchers, teachers, and administrators from the US and countries around the world. The aim of the program is to foster international ties "through the exchange of people, knowledge, and skills," with the grant offering a means to work and live abroad.

For more information on the Fulbright Program please visit http://www.iie.org or http://www.fulbright.no for those specifically interested in Fulbright Norway.